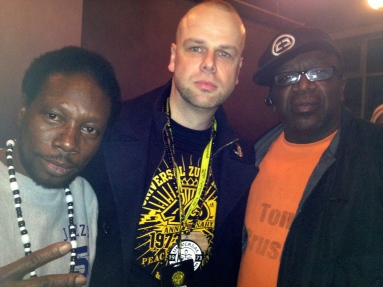 My dissertation explores the roots of Canadian hip-hop, particularly the socio-political and cultural forces that helped shape Toronto’s early scene (approx. 1980-89). This research is generously supported by a J.A. Bombardier Doctoral Canada Graduate Scholarship from the Social Sciences and Humanities Research Council of Canada (SSHRC). My advisor is Dr. Keir Keightley.

In 2015, my article “‘We Wanted Our Coffee Black’: Public Enemy, Improvisation, and Noise” was published in Critical Studies in Improvisation. I recently authored a chapter on Canadian hip-hop pioneer Michie Mee for a textbook on popular culture and co-authored an essay with Dr. Jesse Stewart of Carleton University on early Canadian hip-hop for an edited volume – both published in 2019.

Before enrolling at Western, I earned an MA in Music and Culture at Carleton University (Ottawa), and a BA in Digital Media Studies (4.13/4.33 GPA) from Vancouver Island University, in my beautiful hometown of Nanaimo, BC.

I’m a music industry veteran who enjoyed a 25-year career in Vancouver’s hip-hop scene primarily as a DJ and producer, but also as a recording engineer, radio host, promoter, and journalist. In 1989, I founded “In Effect” at CITR radio (UBC), the first radio show on Canada’s west coast dedicated strictly to hip-hop music. I also collaborated on recordings nominated for Canada’s Juno Award for Rap Recording of the Year (2003 and 2005). I am fortunate to apply my passion for music to academic endeavours and feel that I am uniquely positioned to contribute to Canadian hip-hop scholarship.

My goal is to teach full time at the post-secondary level, specializing in Canadian media, digital technology, popular music and culture, and hip-hop studies. I am also interested in teaching media awareness to elementary and high school students.